Twenty-one years ago, in the wake of the 9/11 attacks, may have been the last time that the United States was openly – even defiantly – united, in pain and patriotism. We have drifted apart since then, gone to our respective corners, and hunkered down inside our respective silos. Ted Koppel hosts “Sunday Morning”. He examines us and reveals the things that keep us apart.

Sunday, October 16 on CBS, and streaming on cbsnews.com and Paramount .

COVER STORY: Over the line – Why some Oregonians want to become part of Idaho | Watch Video
In a state dominated by progressive politics, some residents in rural Oregon east of the Cascade Mountains want to move the border so that their counties become part of Idaho, a more conservative state that more closely aligns with their values. Correspondent Lee Cowan speaks with advocates for the Greater Idaho movement to find out why this idea might not be so farfetched.

U.S.: Seeking common ground – Younger and older generations speak (Video)
“Sunday Morning” contributor Kelefa Sanneh visits Bethlehem, Pa., and sits down with four people over the age of 60, and four under 40, to find out what differences and similarities they see across generations.

HISTORY: History lessons – When America’s politics turn ugly, violent | Watch Video
Historian Jon Grinspan, a curator at the Smithsonian Institution, has studied how intense partisanship in the 19th century was driven by people feeling isolated, their lives unstable, feeding an aggressive, even violent political discourse. He talks with CBS News’ John Dickerson about his new book, “The Age of Acrimony: How Americans Fought to Fix Their Democracy, 1865-1915,” and how our nation’s ugly trends in politics have returned, from partisan news to the white supremacists’ march in Charlottesville and the January 6 insurrection.

READ AN EXCERPT: “The Age of Acrimony”

BUSINESS: Trade secrets | Watch Video
Not everyone is interested in a white collar job or college degree (or in racking up student loan debt). Ted Koppel, a senior contributor to “Sunday Morning”, meets plumbers and apprentices to discuss their chosen profession and how it is perceived by others.

ACTIVISM: Musician-social activist John Legend on the continuing struggle for justice | Watch Video
The award-winning singer-songwriter is an advocate for prison reform in America, a nation that has incarcerated more of its citizens than any other. 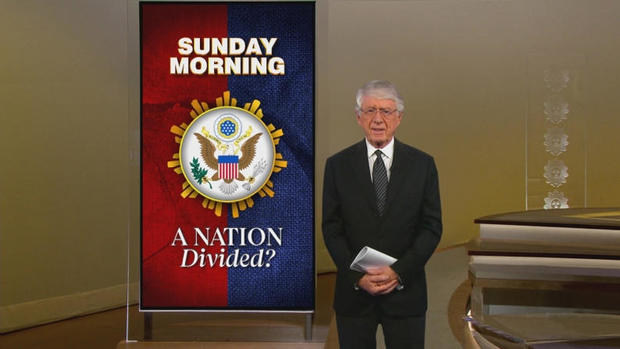 REAL ESTATE: Wyoming’s new land rush | Watch Video
Teton County in Wyoming is home to the widest income divide in America, with a median house price of more than $3.5 million and an average income of $312,000. Correspondent Ben Tracy examines how the rich, attracted to the state’s idyllic settings, have been pushing out the middle class.


SOCIAL MEDIA: How online behavior turns people from Jekyls into Hydes | Watch Video
Online anonymity has made it easy, and depressingly common, to be nasty without fear of repercussions – a lack of restraint that psychologists call online disinhibition effect, or ODE.


COMMENTARY: David Sedaris on coming out, all over again | Watch Video
The humorist has some thoughts about the term “queer” and how people today (or perhaps just humanities professors) identify themselves.

TELEVISION: Norman Lear on the power of laughter to unite Americans | Watch Video
TV legend Norman Lear, whose credits include such hit series as “All in the Family” and “Maude,” always managed to make audiences laugh about dangerous topics: Racism, sexism, bigotry, homophobia. And today, at age 100, he’s determined to find out if we’ll still laugh together. Ted Koppel, a senior contributor to “Sunday Morning”, sits down with him to discuss his future projects.


COMMUNICATIONS: Talk radio – Widening the airwaves’ great divide | Watch Video
The repeal of the FCC’s Fairness Doctrine in 1987 opened the floodgates for extreme partisanship on the airwaves, making commercial talk radio a landscape ripe for controversial opinions aimed at attracting listeners. Jim Axelrod examines how talk radio has polarized Americans and pushed them to the edge of politics.

U.S.: Braver Angels – Seeking to de-polarize America | Watch Video
In an effort to help bridge the nation’s political chasm, the non-profit Braver Angels uses a workshop approach analogous to a marriage counselor, to bring together red and blue. Martha Teichner, correspondent, visits Traverse City, Michigan, a battleground state. Here, participants work together to overcome their fear of the other side and find common ground.


COMMENTARY: Do you get incessant messages from politicians asking for money? Jim Gaffigan does, too | Watch Video
The comedian says he’s being obsessively stalked by the Democratic and Republican Parties, who have one thing in mind.

FROM THE ARCHIVE: Angela Lansbury, “liberated” by Broadway (Video)
Hollywood and Broadway star Angela Lansbury, who earned Five Tony Awards and three Oscar nominations, and who scored 12 Emmy nominations for her role as mystery author-sleuth Jessica Fletcher on the TV series “Murder, She Wrote,” died on October 11, 2022 at the age of 96. In this interview that aired on “Sunday Morning” December 6, 2009, Lansbury talked with CBS News’ Katie Couric about her unparalleled career on stage and screen.

DVR Alert! Find out when “Sunday Morning” airs in your city

Full episodes of “Sunday Morning” are now available to watch on demand on CBSNews.com, CBS.com and Paramount , including via Apple TV, Android TV, Roku, Chromecast, Amazon FireTV/FireTV stick and Xbox.

You can also download the free “Sunday Morning” audio podcast at iTunes and at Play.it. You won’t miss the trumpet anymore!

Thanks for reading CBS NEWS.

Amazon Black Friday sale: Get Apple AirPods Pro 2 at their best price, ever

Second Israeli dies after being wounded in Jerusalem blasts

This week on “Face the Nation with Margaret Brennan,” November 27, 2022

Amazon workers in 30 other countries protest on Black Friday