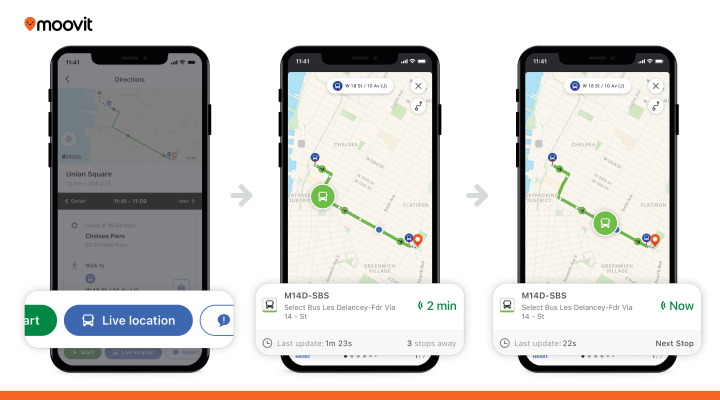 Israeli’s urban trip planning app Moovit has unveiled a new feature Tuesday, which allows users to track the movements of a transit line along the map in real-time. The company claims that the new feature, in addition to Moovit’s real-time arrival countdown and other features, will give users a greater level of certainty and accuracy during their commutes.

“Live location allows you to see transit lines as icons on the map. They move along the map along their journey, and are displayed as icons on the map.” Yovav Meydad (Moovit’s chief growth officer and marketing officer) told TechCrunch via email. The feature is accessible from all Moovit screens where the real-time arrival countdown can be accessed via the Action Bar at the bottom of the screen .”

The live location feature is now available in buses, trains and trams, as well as subways, ferries, ferries, and cable cars. It works in more than 220 towns across 38 nations. Moovit promises that more will be added.

It is a useful feature that Google Maps has added to its own service about four years back.

Riders can see the current location of their line by tapping on the “Live Location” button in the bottom bar. Moovit users can open a map and see an icon moving along the transit line. This allows them to stare at their phones in angst and watch the little bus icon creep closer and closer to their stop.

Riders can also see when the tracking data was last updated, and receive service alerts for the line, Meydad explained. He also noted that users can view multiple lines on the map at once.

” This additional layer of context allows users all the information they need to quickly compare options and make the best decision to reach their destination,” stated Meydad.