“I have been told that I can gently allude to this possibility,” the Marvel star says very carefully.

Black Panther star Danai Gurira had a promising response to rumors of a spin-off series centered on Okoye.

The actress and playwright hinted at the possibility of a Disney series about her fan-favorite warrior and loyal protector of Wakanda during an appearance on The Late Show With Stephen Colbert on Friday.

“I have been told… that I can gently allude to this possibility,” Gurira said carefully when probed by host Stephen Colbert about the rumors. “So I am gently alluding.” A stunned Colbert quipped, “You gently alluding is the Marvel version of a full monty. I can’t believe I got anything out of you.” 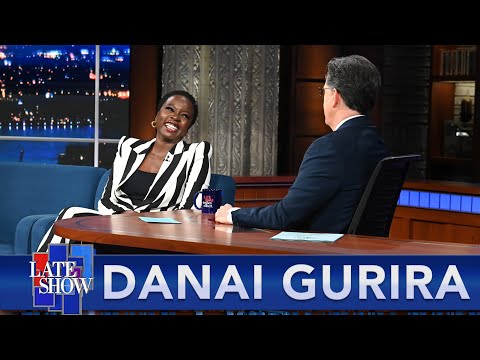 In 2021, a Hollywood Reporter profile on top Hollywood attorneys spotlighted Gurira’s attorney Jamie Mandelbaum and noted that he helped broker a deal on an Okoye origin spin-off series for Disney . Deadline later reported that Black Panther director Ryan Coogler was developing the series.

Reps for Disney didn’t immediately respond to EW’s request for comment about the spin-off.

Gurira first appeared as Okoye, a general of the all-female special force group Dora Milaje, in the first Black Panther film in 2018. She reprised the role in 2018’s Avengers: Infinity War, 2019’s Endgame, and most recently, the 2022 Black Panther sequel Wakanda Forever, which follows Wakandians as they deal with the loss of leader T’Challa (the late Chadwick Boseman).

“There’s that idea of grief and intense emotion feeling like it comes in waves,” Coogler said. “Sometimes a wave can take you away where you lose control of it. You think you’re in control, but the water can always remind you that you’re not.”

Watch Gurira’s interview with Colbert above.